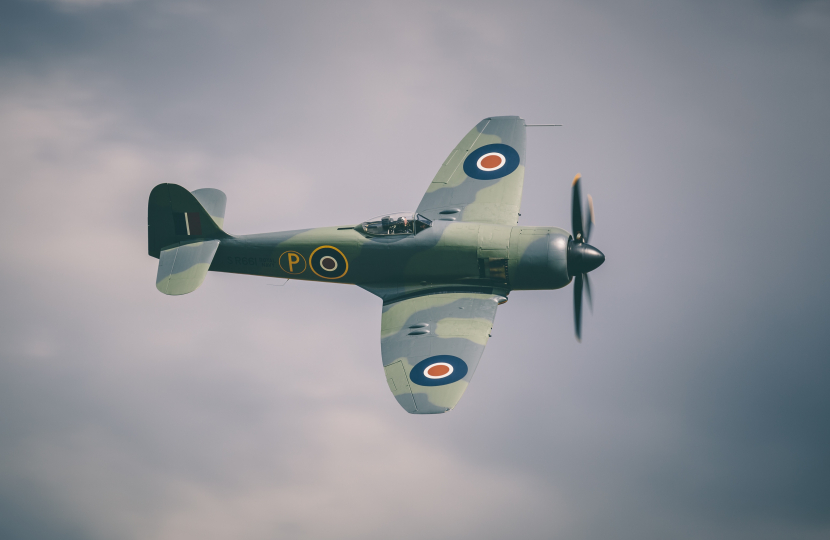 Brendan Clarke-Smith, MP for Bassetlaw, is backing the campaign to commemorate the brave pilots and navigators of the Photographic Reconnaissance Units (PRU) during the Second World War.

The PRU was formed on the 24th of September 1939 and throughout the Second World War it operated highly dangerous, clandestine photographic reconnaissance operations over all theatres of operation, and captured more than 26 million images of enemy operations and installations during the war.

The purpose of the PRU was to provide up-to-date intelligence to strategically plan the Allied actions in the war. Flying Spitfires and Mosquitos, the intelligence it gathered was used by all the armed forces, giving same day intelligence on enemy activity.

The intelligence provided by the PRU was used in the Cabinet War Rooms – now the ‘Churchill War Rooms’ located underneath the Treasury – and was instrumental in the planning of major operations; D-Day and the Dambusters Raid, the monitoring of major shipping movements such as the Bismarck and Tirpitz, and the locating of the site of the V1 and V2 rocket launching site at Peenemünde.

Due to the clandestine nature of their operations – they flew solo operations, unarmed and unarmoured – the death rate was nearly fifty percent. However, despite having one of the lowest survival rates of the war – life expectancy in the PRU was around two and a half months – there is no national memorial to the PRU.

The ‘Spitfire AA810 Project’ has therefore led the campaign to establish such a memorial to the PRU pilots and navigators.

Among those who served in the PRU were Peter Illingworth and Thomas Burdett.

Peter Frederick Illingworth was born in East Retford in 1917 and joined the RAF pre-war to learn to fly.

As a young Pilot Officer, he joined 56 Squadron flying Hawker Hurricanes from RAF North Weald and he proved to be skilful at both night flying and navigation. His navigation skills brought him to the attention of his commanding officers and just before the Battle of Britain he was posted to 'A' Flight of No 1 Photographic Reconnaissance Unit based at RAF Heston in West London.

Converting to Spitfires, Illingworth flew many missions over France and the Low Countries before a posting to Wick in Scotland saw him flying yet more unarmed missions over the North Sea to monitor German activities in Norway.

Postings to fighter squadrons followed with him serving in several units in the Middle East for short periods before he became the Commanding Officer of 112 Squadron flying Kittyhawk aircraft from Sicily.

In March 1944 he was shot down by flak, crashing into a mountainside in Yugoslavia - to avoid detection he managed to reach a farm where the family there helped hide him under a pile of stones next to a wall until the German search parties had passed.

He eventually returned to his unit in Sicily with the help of local resistance units.

Later in 1944 he appears to have been posted to 540 Photographic Reconnaissance Squadron once more, flying Spitfires.

He eventually left the RAF in 1946 to run a tea plantation in India for a year before returning to the RAF. He converted to the new Meteor jet fighter with 263 Squadron and later he served in Kuala Lumpur working in psychological warfare.

He retired a Squadron Leader in 1958 and ran a pub in Buckinghamshire and a restaurant in Surrey until he finally retired in 1975.

He moved to Shiplake that same year and passed away there in February 2015 aged 97.

F/o Thomas Henry Burdett DFC was born in Worksop, training as a pilot he flew with 540 Photographic Reconnaissance Squadron and survived the war.

However, very little else is currently known about both his military and civilian life. The Spitfire AA810 Project would therefore very much like to hear from relatives, friends or researchers who may have more information about him and his service.

“I am delighted to support this fantastic campaign to commemorate those who served in the Photographic Reconnaissance Unit.

This includes Peter Illingworth and Thomas Burdett, who both served admirably under exceptionally difficult conditions.

I look forward to working with the Spitfire AA810 Project to establish this memorial and to being able to pay my respects there once it is completed.”

If there is anyone related to Peter Illingworth or Thomas Burdett, or if anyone know someone who served in the PRU during the war, please go the Spitfire AA810 Project website (www.spitfireaa810.co.uk), or get in touch with Tony Hoskins, Tony@spitfireaa810.co.uk.