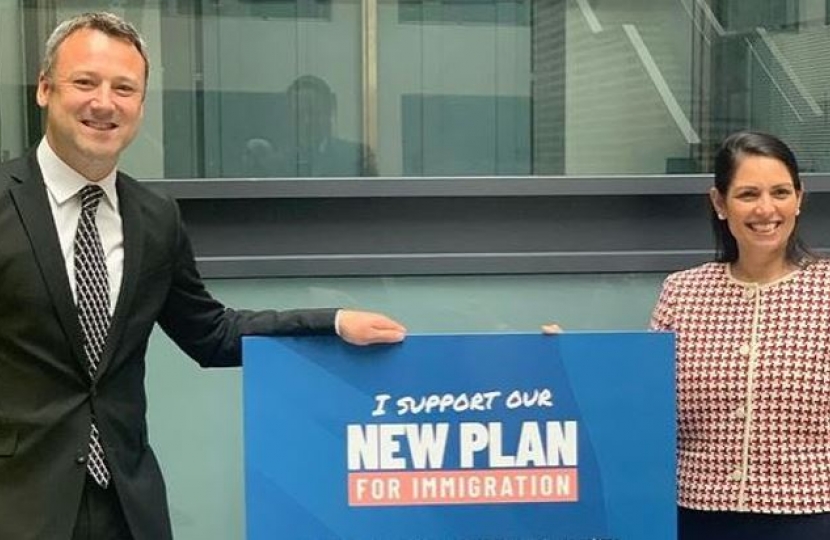 Last week I discussed plans for the Government to use offshore centres when processing asylum applications. I have had a lot of feedback from you on this issue and I met Home Secretary Priti Patel to share your concerns, to discuss illegal immigration and also to lobby for more funding for policing in Bassetlaw.

This week the Government introduced the Nationality and Borders Bill. The Bill is the cornerstone of our New Plan for Immigration, delivering the most comprehensive reform in decades to fix the broken asylum system.

The Bill will be firm but fair: fair to those in genuine need, but firm to those who break the rules.

The principles behind the Bill are simple. Access to the UK’s asylum system should be based on need, not on the ability to pay people smugglers; Illegal immigration should be prevented. Those with no right to be in the UK should be removed. Those in genuine need will be protected.

The case for change is overwhelming.

The system is broken. We stand by our moral and legal obligations to help innocent people fleeing cruelty from around the world. But the system must be a fair one. In 2019, UK asylum applications increased by 21% on the previous year to almost 36,000 – the highest number since the 2015/16 European ’migration crisis’. The current appeals system is too slow. As of May 2020, 32% of asylum appeals lodged in 2019 and 9% of appeals lodged in 2018 did not have a known outcome. Shockingly, the asylum system now costs over £1 billion a year to run.

The Bill – and the wider New Plan for Immigration – has three key objectives:

1. Make the system fairer and more effective so that we can better protect and support those in genuine need of asylum. Over the last six years the UK directly resettled 25,000 people from places of danger – more than any other country in Europe.

2. Deter illegal entry into the UK breaking the business model of criminal trafficking networks and saving lives. Small boat arrivals reached record levels this year, with over 3,700 people arriving in the UK this way in the first five months of 2021. This is more than double the comparable figure for 2020.

Together, these reforms will create the fair but firm system the public expects – and which we will deliver.