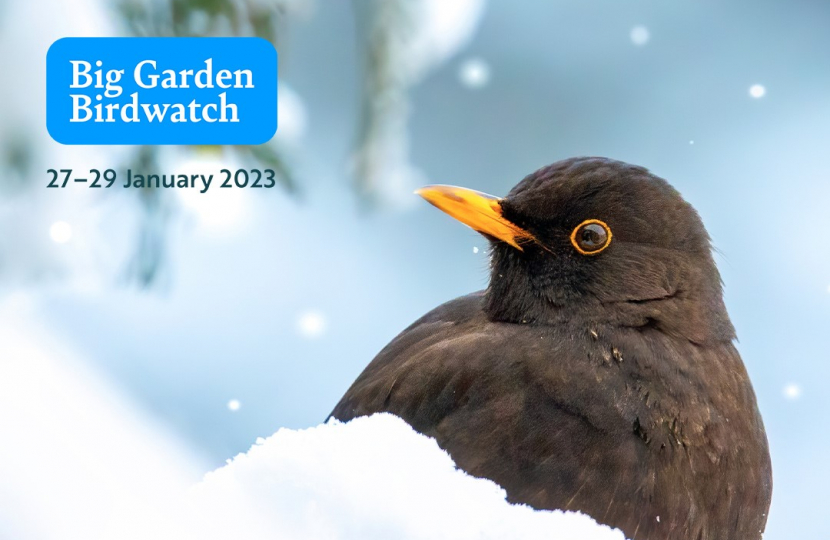 Brendan Clarke-Smith, Member of Parliament for Bassetlaw, will this weekend be taking part in the RSPB’s Big Garden Birdwatch.

The world’s largest garden wildlife survey returns, with hundreds of thousands of people watching and counting the UK’s Garden birds over the last weekend in January for the RSPB’s Big Garden Birdwatch.

This year’s event takes place on 27, 28 and 29 January 2023. People are asked to spend just one hour watching and recording the birds in their garden, balcony, or local park, then send their results to the RSPB.

This year marks the 44th Big Garden Birdwatch. Starting in 1979, it has since become a much-loved annual event, that helps give the RSPB a valuable snapshot of how our garden birds are doing in the UK. Over that time, 172 million birds have been counted and nearly 11 million hours spent watching garden birds.

“It is of the upmost importance to protect the millions of birds who live here the UK as part of the government’s commitment to conserving British wildlife. We have a responsibility to uphold and strengthen animal rights. This year’s event is a fantastic opportunity for Bassetlaw constituents to take part in such an interesting branch of ecology. I commend this project and the wider work of the RSPB. I look forward to the results of the wildlife survey.”

The house sparrow remained at the top of the Big Garden Birdwatch rankings as the most commonly seen garden bird with more than 1.7 million recorded sightings in 2022. Blue tit and starling remained in the number two and three positions respectively.

Over its four decades, Big Garden Birdwatch has highlighted the winners and losers in the garden bird world. It was first to alert the RSPB to the decline in song thrush numbers, which are down a shocking 81% compared to the first Big Garden Birdwatch in 1979. This species was a firm fixture in the top 10 in 1979, but by 2009, its numbers were less than half those recorded in 1979. It came in at 20 in the rankings last year, seen in just 8% of gardens.

To take part in the Big Garden Birdwatch 2023, watch the birds on your balcony, in your garden or in your local green space for one hour at some point over the three days. Only count the birds that land, not those flying over. Tell us the highest number of each bird species you see at any one time – not the total you see in the hour.