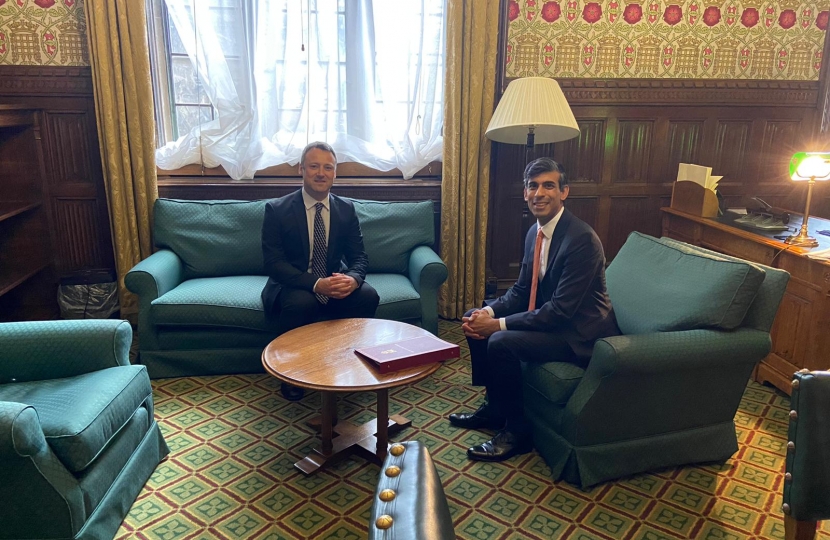 On Tuesday 6th July, Ben Bradley MP for Mansfield and Warsop, Lee Anderson MP for Ashfield and Eastwood and Brendan Clarke-Smith MP for Bassetlaw, met with the Chancellor of the Exchequer to discuss the Mineworkers' Pension Scheme. During the meeting, all three MPs highlighted the findings of the report by the BEIS Select Committee and concerns around the government's response to this report.

Since first being elected in 2017, Ben Bradley has consistently campaigned for a fairer deal for miners. This has included calling for and providing input to the BEIS inquiry as well as ensuring government extended the guarantee to cover bonuses.

'I was pleased to secure a meeting with the Chancellor yesterday to discuss the government's response to the BEIS Select Committee report into the Mineworkers' Pension Scheme. The three of us all raised our concerns about the response and highlighted the detailed work of the committee in producing the report.'

'This is an issue that affects so many of my constituents and it is important to look at where we can go next in order to secure a fairer balance for miners. It is important to recognise that this issue is not closed and government has not entirely moved on from this issue. I would like to thank the Chancellor for meeting us and look forward to further conversations on the issue.'

'I have been very vocal in Parliament in my support for a fairer deal for ex miners and their families. I have met the Chancellor on a couple of occasions as well as raising the matter in the House. After lengthy discussions with the Union of Democratic Mineworkers and a pension campaign group I feel momentum is gathering and we are headed in the right direction.'

'I did see this week in the press that one local campaigner was disappointed with us MPs for not supporting the campaign. This simply is not true and I would remind the campaigner that at no time has he ever contacted me to ask to work together. My door is always open and I will continue to push for a fairer deal for us ex miners.'

Brendan Clarke-Smith was quoted as saying:

'Mining has played a huge part in our communities and, as Secretary of the Coalfield Communities APPG, I’ve taken every opportunity to raise the Mineworkers’ Pension Scheme with Government.'

'It was great to have another chance yesterday to raise this directly with the Chancellor, alongside other priorities for our region. I can assure residents across Nottinghamshire that this discussion is not over yet.'