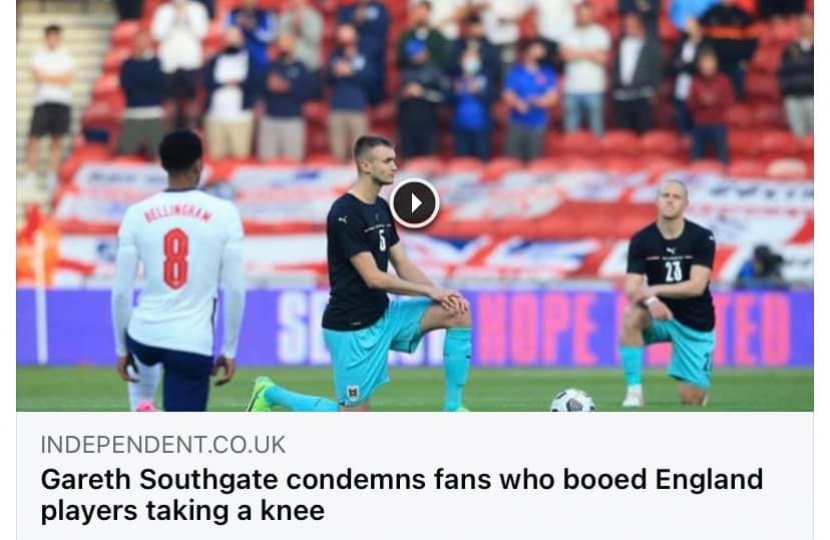 Last night I watched England’s friendly against Austria at the Riverside Stadium in Middlesbrough. Whilst the match itself wasn’t much to talk about, players ‘taking the knee’ and subsequently being booed by a large proportion of the crowd was.

I’ve given my opinion on this issue a number of times. I don’t think I’ve spoken to a single person who doesn’t agree that racism is wrong and there is always more that can be done to tackle it, both in football and in wider society. There are many examples of initiatives over the years that have been launched to do just that.

Whilst no country will ever be perfect and you can never account for the actions of every individual, I think the U.K. can be held up as one of the most tolerant and diverse countries in the world. Football has also come a long way, even in my own lifetime, when I remember seeing players like John Barnes receiving abuse in the 1980s.

But this time last year we saw widespread vandalism and disorder from groups claiming to be ‘anti-racist’, including buildings being smashed up, police being attacked and we even had threats to our local pubs over their historical names. For me, the behaviour of these groups, particularly the ones acting under the banner of Black Lives Matter, did nothing to promote equality or race relations. In fact, all they did was promote division.

It was at this point we started to see the football authorities promoting Black Lives Matter and using this in promotional material, on shirts and even players ‘taking the knee’, which was facilitated by authorities at the start of every game. Whatever people say, players had no choice but to do this (imagine if one had refused to do it and the press they would have received). We even saw Keir Starmer and Angela Rayner photographed taking the knee.

What many of us realised - and what the football authorities seemingly didn’t - is that Black Lives Matter is a political movement and also promotes some quite eccentric and extreme policies, such as abolishing the nuclear family and defunding the police, as well as many others.

Whilst I don’t doubt that the football authorities had genuinely good intentions, I believe they were misguided and that they should have devised their own campaign at the time, rather than seemingly allying themselves with a political movement.

I’ve seen many examples where players have been able to show unity and promote putting a stop to racism within the game. Just this last week we saw this at the England v New Zealand cricket match and other examples include rugby league players linking arms before a match. Football at other levels of the game has also managed to find other ways.

So why then does the Premier League and the England team persist with such a divisive and politically charged approach when there are others we can all get behind?

This was always going to end badly and the first time fans were let back into the stadiums the gesture was booed. The first time it was convenient for proponents of taking the knee to argue it was the actions of a particular club’s notorious set of fans (Millwall). I would suggest that their view of the club’s fans is not only 30 years out of date, but we have seen since that supporters of clubs at all levels aren’t particularly impressed with the gesture either.

That particular game also saw a player standing in the centre circle with a clenched fist in the air whilst the others took the knee - I’m assuming this was to be the centre of attention. Not long later we saw a rather unsavoury banner flying from a plane during one of Burnley’s matches declaring ‘White Lives Matter’. Again, completely avoidable and a consequence of a situation that had been inflamed.

Likewise I have been very disappointed when some have suggested that opposition to taking the knee is somehow disrespectful to players - especially black players. Ask Wilfried Zaha what he thinks. Last season Les Ferdinand also questioned whether taking the knee was actually having any sort of effect.

Now we see this sort of politicisation of our game spreading. First we saw Leicester’s Hamza Choudhary with a Palestinian flag at the FA Cup Final and then two Manchester United players parading around the pitch with one, presumably to celebrate winning nothing again this season. The fact they had the flag upside down and probably couldn’t find the place on a map was probably lost on them. Last week Chelsea won the Champions League. Imagine the reaction if Roman Abramovich had paraded around with an Israeli flag after the match (a country he is actually a citizen of).

To suggest that fans “aren’t quite understanding the message”, as Gareth Southgate has done, is an insult to their intelligence. Fans understand perfectly well - they are just sick and tired of being preached and spoken down to. They are there to watch a football match, not to be lectured on morality.

It is the football authorities and elements of the media who aren’t understanding the message. Find something we can all support and ditch this ridiculous empty gesture.

I pretty much fell out of love with our national team years ago. All I saw were a lot of overrated and overpaid prima donnas who couldn’t be bothered to put the same effort into the England team as they did for their clubs. Gareth Southgate changed that with a young and dynamic team, who managed to rediscover the soul of what it meant to represent your country and who care.

Like that team Southgate has shaped, our fans care about tackling racism in the game and in society. So let’s find a way we can all do this together, rather than persisting with divisive political gestures, regardless of how innocent the intention may be.

This weekend we take on Romania in our next warm up game. Let’s learn some lessons and make it a day we can all celebrate.