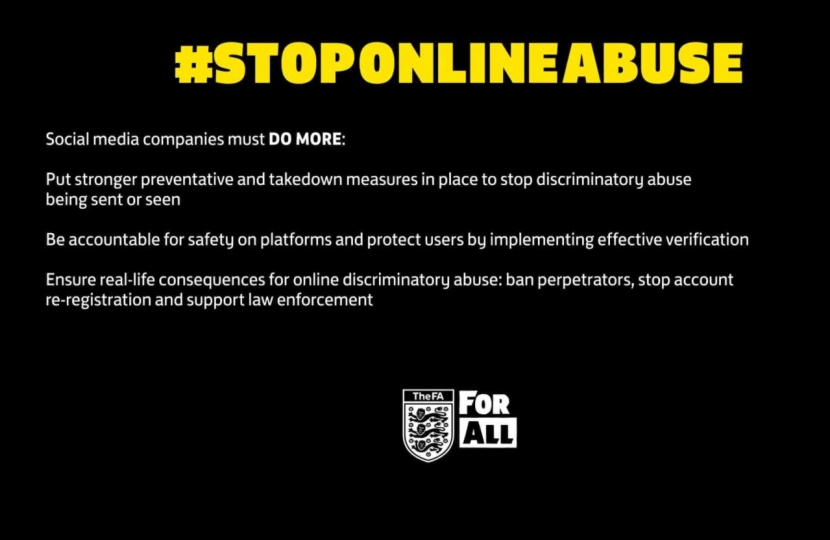 On a morning when we should have been talking about our second best performance at a major tournament ever, we are instead having to discuss the behaviour of idiots online.

Let’s not pretend that this wouldn’t be happening if players had scored their penalties, we’d have won the tournament or even if the taking the knee protests hadn’t happened. This sort of online abuse goes on ALL THE TIME.

Recently I attended a zoom meeting with Thierry Henry about tackling online abuse. Social media companies and internet providers need to do more stop this from happening.

I also receive online abuse on a daily basis. This is not because of the colour of my skin, the country I come from or my sexuality, but because of the job I do. Some examples include a person threatening to cut the brakes on my car, somebody telling me my wife should be deported because I am a Brexiteer or in one case that my children should have their necks knelt on until they are dead.

It’s far too easy for people to set up anonymous accounts and troll or threaten people online. Twitter in particular is an absolute online cesspit and I generally avoid it like the plague.

In one case a colleague of mine blocked a regularly abusive troll from his social media. His reward? The local newspaper gave the troll a whole page of coverage as though his human rights had somehow been breached. I’ve blocked many myself, either for having fake profiles, spamming information pages or simply for being foul-mouthed louts. They can complain all they like. Civilised debate and criticism is fine - their behaviour is not.

So let’s actually start holding people to account for this sort of abuse, be it of our footballers or anybody else in society. Social media companies need to do far more to deal with this and we need a zero tolerance approach. I will always defend people’s right to free speech. This is not free speech - this is simply abuse.