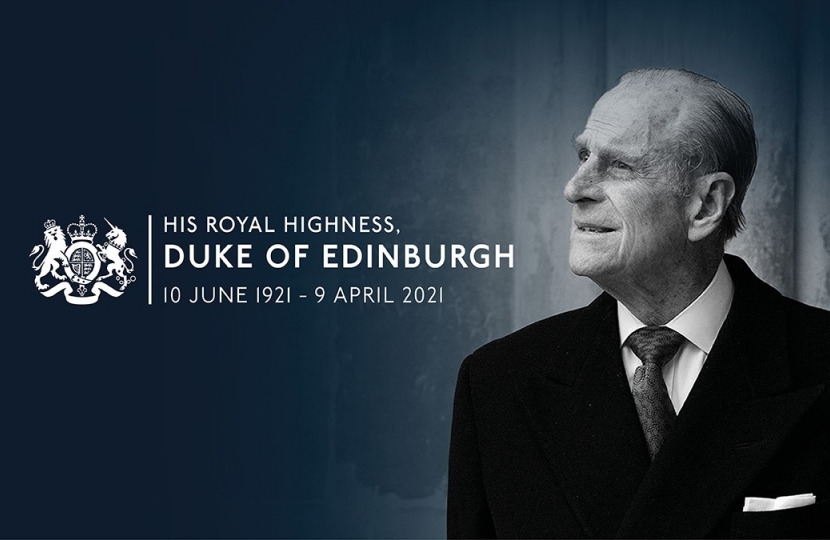 This week we join the nation in mourning the loss of His Royal Highness The Prince Philip, Duke of Edinburgh as preparations are under way for Saturday’s funeral. Members of Parliament returned early from the recess to pay their own tributes on Monday, as did the Prime Minister and the Leader of the Opposition.

Upon news of the Prince’s sad passing, all political campaigning for local elections was immediately suspended until tributes had been paid in the Commons. After recommencing on the morning of Tuesday 13th, they will once again be suspended on Saturday, the day of the funeral, as a mark of respect.

Over his decades of service, HRH Prince Philip dedicated himself every day to the people of the United Kingdom and the Commonwealth.

From his eventful Navy career to his charity work and efforts to modernise the monarchy, Prince Philip served his country and his Queen.

For me, I witnessed as a teacher and youth worker the tremendous impact his Duke of Edinburgh’s Award scheme had on the lives of so many young people and the positive contribution to society it continues to have. Prince Philip also came to our district to visit Bevercotes Colliery in the 1960s.

Prince Philip was a constant by the Queen's side and for decades an integral and much-loved member of the Royal Family. The longest-serving consort in the history of the British monarchy.

For many Britons, the defining characteristic of Prince Philip was not his public service or his royal standing, but his propensity to make unscripted, off-the-cuff comments which brought laughter and smiles to our faces.

My deepest condolences to Her Majesty the Queen and the Royal Family who have lost not just a much-loved and highly respected public figure, but a devoted husband and a proud and loving father, grandfather and great-grandfather.

Usually Parliament would have a Book of Condolence to sign, although Covid-19 has meant things have had to be done differently this time around. Therefore, tributes will be recorded and then presented together to the Palace. Below is the message I wrote on behalf of constituents.

The people of Bassetlaw mourn with Her Majesty The Queen and offer our condolences to her and the rest of the family at this sad time. We give thanks for the extraordinary life and work of HRH The Prince Philip, Duke of Edinburgh and the countless young lives he has inspired, along with his devotion to a life of service and defence of our great nation and the Commonwealth. Rest in peace.

Those wishing to write their own message may do so here. https://www.royal.uk/books-condolence and can also Visit http://royal.uk for updates from Buckingham Palace and information about The Duke of Edinburgh's life and work.