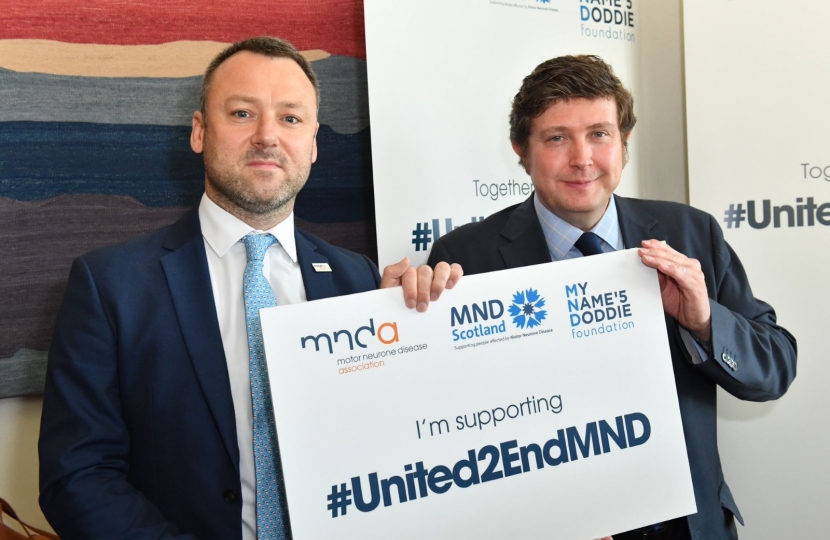 Brendan Clarke-Smith MP, met Rob Burrow MBE, Stephen Darby and others living with MND as they delivered a letter to No 10 calling for £50 million of Government funding for targeted MND research.

United To End MND led by coalition of MND charities, neurologists and people with MND.

MP for Bassetlaw met the former sportspeople on the final stage of their journey to Downing Street to deliver a letter on behalf of hundreds of people who are living with motor neurone disease.

The letter, which was sent on its way by Doddie Weir from his farm in the Scottish borders, and signed virtually by people across the country, urged the Government to inject £50 million into targeted MND research.

The call comes from a coalition of MND charities – the MND Association, MND Scotland and My Name’5 Doddie Foundation – people living with MND and leading neurologists.

Many of the leading lights in the coalition were on hand to meet Brendan Clarke-Smith MP at a reception at Westminster before the letter continue the final leg of its relay to Number 10. It was handed in by a delegation including Rob, Stephen, former West Midlands Police Assistant Chief Constable Chris Johnson and Nicola Waters, a leading figure in the campaigning coalition.

The letter stated: MND is a death sentence. We will all die of the disease because there are no treatments to help us. However, research has now reached a point where a cure or life-saving treatments can be found.

The current piecemeal and protracted approach of funding individual projects will not deliver the life-saving treatments we need. We urgently appeal for action and investment now.

Brendan Clarke-Smith MP said: "It was a pleasure to welcome everybody to Westminster and to have the opportunity to say thank you for the amazing fundraising and campaigning work being done to support those with Motor Neurone Disease. As Vice Chair of the All-Party Parliamentary Group on MND I am fully supportive of efforts to secure the backing that will help fund research into curing this cruel disease".

Among the group should have been former Scotland rugby giant Doddie Weir OBE, who is also living with MND. After starting the journey to Downing Street, Doddie received a notification that he and his wife Kathy have been in close contact with someone with Covid-19 and as such made the decision to return home to protect those around him.

For more information about the campaign visit www.mndassociation.org/unitedtoendMND